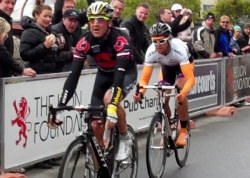 Calder Stewart-Bike NZ gun Hayden Roulston narrowly fought off Share the Road’s Jack Bauer in a sprint to the finish line of the 163km stage. Bauer earned the yellow jersey for his gallant effort but a meagre three seconds separates the pair – setting up a battle of epic proportions for tomorrow’s final two stages.

“It’s going to be tough but I’m going to do it,” Bauer, of Nelson, said. “I’ve only got to hold on to three seconds this year – anything can happen of course but I’m up for it, the legs are good and the team is strong.”

“If you were a betting man, I wouldn’t bet against me tomorrow – I’ve won the race twice on this stage so we’ll just wait and see. I might have to turn myself into a sprinter overnight,” he said.

“It’s going to come down to the wire … it’s never over until that last millimetre. I’m going to fight to win this race, I believe I’m good enough to win it and I’ve got a strong enough team to win it. We’re all in very high spirits now.”

A Commonwealth Games silver medallist highly-rated for his own tactical nous, Roulston was not shy in critiquing the performance of his nearest race rivals.

“Share the Road did another tactical error if you ask me by riding so hard before the hill that when they got to the hill there was no one left apart from the two on GC … it blew to bits on the hill and after that it was just dog eat dog,” he said.

Blackmount Hill proved a monumental point in the race, with Roulston striking soon after the arduous ascent, forcing Bauer to tack on.

“I knew all the energy I’d saved up until today would play into my advantage and, as you can see, it did,” he said.

Roulston said Bauer’s decision to work with him was yet another mistake.

“You could probably add it to the list. I was surprised but I wasn’t going to say no to it … it worked in my favour, that’s for sure,” he said.

“I hoped I could take the stage and get the time bonuses – that’s why I was working with Roly towards the end there but I just didn’t read the run in well enough. He led out and there was no getting through the gap.”

Bauer was not prepared to simply hang off Roulston’s wheel.

“I know Hayden well and respect him as a rider – I wouldn’t have sat on him all the way and then pumped him at the line, it’s not the thing to do …you beat people fair and square, you don’t try to roll them like that.”

Crosswinds, rain and even the odd bit of sleet made for challenging conditions, much to Roulston’s delight after four days of uncharacteristic sunshine.

“Let’s be honest and say the first day of the Tour of Southland starts today,” he said. “I was doing the rain dance, wind dance, everything dance last night I can assure you – when I woke up in the middle of the night and heard the wind and the rain, I started smiling.”

Yates, who has been plagued by bad luck during his 10-year quest to win the Tour, was left devastated after crashing for the second time in two days – this time out of contention.

He was thrown to the road when the sleeve of the rain jacket he was attempting to remove caught in his front wheel. Yesterday, an official’s motorbike collided with him less than 1000m from the finish on the Crown Range terrace, and the injuries Yates suffered had an impact today.

“In my mind the GC had already kind of slipped away. Roulston put in a huge dig and I wasn’t able to follow. I had pretty much no sleep last night and was struggling on the bike today with all the bumps and scraps. I was pretty stiff and then had a wee wardrobe malfunction,” he said.

“I copped it pretty hard in the ribs and lost a bit of skin again, so the Tour of Southland takes another victim.

“I struggled to breathe that last 20km with my ribs, I don’t know if I’ve done anything serious but I’ll get checked over tonight, patched up again and see how it is tomorrow.

“The Tour is starting to take its toll and it all adds up. There are no excuses really – when the hammer goes down and you’re not able to follow, it’s pretty cut and dry. The better men won today.”

Yates was “stoked” Share the Road had managed to retain the yellow jersey – albeit by the skin of its teeth.

“I might have to pull a few laps with the boys up front for a change – the armchair ride is over.”

Another powerful display from Subway Avanti rider Joe Cooper, of Wellington, earned him an unassailable lead in the King of the Mountain stakes, while Pure Black Racing’s Roman van Uden, of Auckland, kept his grip on the Sprint Ace classification.

In the battle for Under-23 supremacy, Christchurch’s Josh Aitkin, of Benchmark Homes, retained the jersey.

Love these roadside banners on Stage Seven to Te Anau. You up for it Gordy?