Christchurch teenager Josh Atkins has etched his name in the history books as the youngest rider to be crowned the 2011 PowerNet Tour of Southland champion.

“I’m very stoked to pull it off for the team. They rode incredibly,” Atkins said.

“Pure Black’s a professional team overseas and they threw what they had at us. We ride this tour together and that’s all we’ve done together. But we outrode everyone … the guys were on the front the whole day just smashing it.

“I’ve won the tour but I wouldn’t have done it without Shane, Myron, Cam, Alex and Tom Scully. It was all their work that brought me to the line in yellow.”

He attributed his powerful form to being relaxed.

“I’ve had a blast this week the whole time. After this year I didn’t enjoy riding my bike too often and since I got home from overseas I just took a way more relaxed approach,” he said.

“Throughout the Tour I was just having a good time and each day working towards a small goal and wanting to rip some guys’ legs off on the hill really.”

With hail stones pelting his face as he completed media interviews on the finish line, Atkins not surprisingly didn’t commit to defending his title.

“Last year I said I’d never do it again and I’m saying it again this year but once it’s over you’re hooked on it and you want to come back,” Atkins said.

Today’s stage eight honours went to Ascot Park Hotel’s Patrick Bevan, of Rotorua, who held off a fast-finishing Jason Allen, of Christchurch, and managed to shave Atkins’ overall winning margin to just 57secs in both the overall GC and under-23 ranks.

“It’s just awesome. I’ve had a great week and the Ascot Park boys have been awesome. Clinton’s (Avery) looked after me. He’s the biggest, nicest wind break you could ever have and he’s looked after me all Tour. I’ve barely put a pedal in the wind until it really counted and I’ve made sure each time I’ve have I’ve done the best I could,” Bevan said.

He paid tribute to the impressive exploits of PowerNet’s team of under-23 riders.

“I’m sure they earned a lot of respect from some of the more mature rides who got a lesson in how to ride for a leader.”

Traditionally blamed for any unseasonable weather which strikes in November, this year’s Tour was no exception when a wintery blast forced the cancellation of this morning’s time trial at Winton. With snow blanketing the roads, teams retreated to the sanctuary of their accommodation to await a decision on the final stanza.

It added an agonising three hours to Atkins’ downtime.

“Probably the best way to say it, I was pretty much shitting my pants really. I wasn’t looking forward to it, I was nervous and just real jittery,” he said. “When I woke up, all I could do was laugh when I saw the weather.”

Following extensive checks of the course and consultation with local and national weather forecasters, organisers determined it was safe to run the final stage from Winton to Invercargill.

The only change to the original 87km route was the removal of the final three laps of Queens Park, with the race finishing when riders first reached Gala Street, removing 12km off the stage.

Auckland’s Gordon McCauley finished his 19th PowerNet Tour of Southland with the Harcourts Sprint Ace title, while Joe Chapman was a clear winner of the Hydralink-Jesco King of the Mountains. 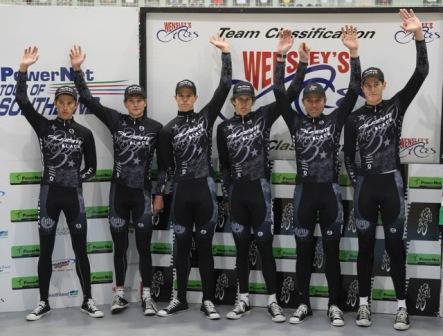 With the honour of being the first Southlander home, PowerNet’s Scully, of Invercargill, was justifiably proud of his team’s achievement.

“We all put one hundred percent into it today and we really couldn’t be happier with how things went,” he said.

“When we stepped up for the yellow on Wednesday, it wasn’t something we had really thought of but it was always possibly on so we’re really, really happy that Josh could get up for it – it’s a dream come true and it was a huge team effort. Everyone had their part to play.”

Results from the 8th stage of the PowerNet Tour of Southland