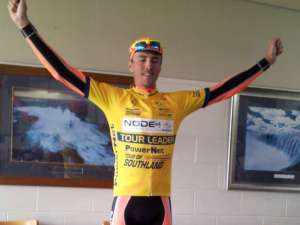 30/10/2012 - A commanding climb up Bluff Hill has earned Node 4-Subaru’s Mike Northey a stage win and the yellow jersey after Stage Two of the PowerNet Tour of Southland.

The Auckland-based rider was strong throughout the 137km stage and now takes an eight second lead going into tomorrow’s double stage.

The final climb up the infamous Bluff Hill was brutal, Northey said.

“I rode up the other day with the boys who hadn’t done it before, so I knew that if you saved yourself for the steep part it would help you … I knew if I saved something in the tank I could go a bit quicker,” he said.

“It’s not my style of climb, but given the circumstances today it worked out well for me. I’m not a climber, so to do this (win the stage) is pretty special.”

Those circumstances included some strong cross winds that the field had to contend with.

A group of 15 riders representing most of the major teams and including Northey and teammate Matt Cronshaw, made an early break and maintained what became a 4 minute lead as the stage passed through Central Southland then on towards Bluff.

That group was whittled down to 10 as it neared the bottom of Bluff Hill and by the top just seconds split the field, with Northey taking stage honours 3 seconds ahead of Bissell Pro Cycling’s Carter Jones and 25 seconds in front of Pure Black Racing’s Taylor Gunman.

The win puts Northey into yellow, eight seconds up on Jones. Gunman, who will now wear The Co-operative Bank U23 jersey after a strong day, is third in GC. PowerNet’s Cam Karwowski sits in fourth.

“We’ll have a bit of work to do on the front now and we’ll just take every day as it comes,” Northey said.

“We’ll see how long we can stay in the top three – that’s my goal, top three in GC, so we’ll just see what happens.”

A crash on the way from Makarewa to Winton signalled the end of racing for five riders who were forced to withdraw.

Tomorrow’s racing will include two stages. The first – Stage Three – starts in Riverton and is a 48km route to Tuatapere. It is followed by the fourth Tour stage, a 100km stage from Tuatapere to Te Anau.