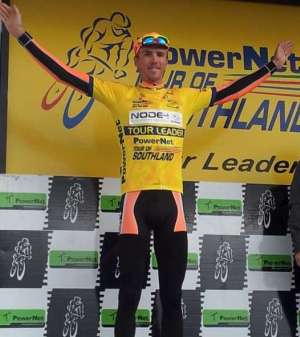 31/10/2012 - It was another sprint finish and another stage win for Bissell Pro Cycling’s Patrick Bevin after Stage Three of the PowerNet Tour of Southland today, but Node 4-Subaru’s Mike Northey will keep the yellow jersey as they embark on the next stage to Te Anau this afternoon.

Bevin, who won Monday’s Stage One in a sprint finish into Lumsden, said today’s 48km route from Riverton to Tuatapere was the hardest of the PowerNet Tour so far. A break of 18 riders got away from the peleton after Colac Bay and battled gusty cross winds almost the entire stage.

Four-time Tour winner Hayden Roulston (Calder Stewart), Heath Blackgrove (PowerNet),Tour leader Northey, Bissell Pro Cycling’s Carter Jones and U23 rider Taylor Gunman (Pure Black Racing) were all amongst the top 25 riders that crossed the line together, ahead of the peleton, in Tuatapere and Bevin says the competition within the group signalled some serious racing ahead.

“Hayden Roulston was definitely throwing it across the most and the Node 4 guys were up there all day,” he said.

“This afternoon is looking like it will be a good one and it seems like the Tour is well and truly underway.”

Clinton Avery (Ascot Park Hotel-Kia Motors-NZ Bike Magazine) was second across the line and Alex Ray (Stewart Imrie Financial Services) was third. Northey was fifth across and will maintain his eight second lead going into this afternoon’s Stage Four which runs from Tuatapere to Te Anau.