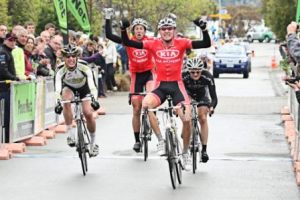 Defending champion Hayden Roulston’s grip on the 2011 PowerNet Tour of Southland yellow jersey has been shaved to just six seconds – and he’s not fazed one bit.

“I’m pretty happy to be still in yellow but I wouldn’t have been disappointed to lose it just to give the team a day off tomorrow. I thought we had lost it actually so to hear I’m still in yellow was a bit of a surprise,” Roulston said.

The first breakaway group of the stage was swallowed up by the peloton after the tedious Blackmount hill climb, won by Cambridge’s Eric Drower.

Spurred on by the quest for the yellow jersey, Macic worked tirelessly on the front but received little support and was shut out in the sprint to the finish, forcing him to settle for moving into second in the overall GC.

“The team was really motivated today. We’re not exactly the largest team but everyone plays so well together,” he said.

“This is actually my first really good victory in New Zealand. After coming second by just a couple of millimetres in Gore a few years ago, I’m really happy now to get something back.”

Pure Black Racing overtook Calder Stewart in the team standings by 13sec – a development which was also of little concern to Roulston.

“We’re here to win the race, we’re not here for team GC, we’re not even here for stage wins or anything else. There’s only one thing that matters and that’s how you’ve got to race the Tour,” he said said.

“When you go and chase the team GC, you automatically kill guys in the team, but for what? We’d rather win the race and go down fighting than go for something that isn’t actually important to us.”

As the mind games begin, Roulston questioned the tactics of some of the Tour’s younger riders.

“It’s just young riders riding young, you know. You wouldn’t see it very often in Europe having the number one team in New Zealand, Pure Black, attacking us when we’re riding tempo. It’s a little bit amateur-style racing but hey, we’re in New Zealand and that’s just the way it goes.”

Pure Black’s Glen Chadwick said they were determined to heap the pressure on the powerful Calder Stewart outfit.

“It was all about trying to stick it to Calder Stewart basically and we gave it a good crack up the mountain and down the other side. We just want to put them under a lot of pressure and I think we did,” he said.

PowerNet’s Josh Atkins retains the Co-Operative Bank under-23 jersey and remains a definite threat in the GC stakes just 10sec adrift of Roulston.

Auckland’s Gordon McCauley tightened his grip on the Harcourt Sprint Ace jersey, while Dunedin’s Joe Chapman continues to dominate the Hydralink-Jesco King of the Mountain standings.

Earlier in the day, Auckland’s Alex Ray claimed the 48km stage three from Riverton to Tuatapere for his H and J Smith Outdoor World – Avanti Plus team.

“I was backing myself for most of the stage. Once we got away I knew we had a pretty good chance of staying away … I knew I had the legs,” he said.

Tomorrow’s 179km stage from Te Anau to the Crown Range, near Queenstown, has been mooted as race-defining, but not according to Roulston.

“If you have a good ride tomorrow I guess you can add a few more seconds but I don’t think it’s all over. There actually has not been any wind yet and that’s what the peloton is forgetting. If they think it’s been hard they should wait until there’s a decent crosswind,” he said.

Results from Stage 4 of the 2011 PowerNet Tour of Southland.

Results from Stage Three of the PowerNet Tour of Southland