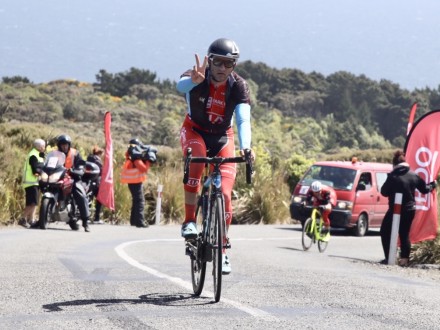 Defending Tour of Southland champion James Piccoli proved just what a tough bike rider he is with victory on Bluff Hill today.

The Canadian’s chances of going back-to-back in the SBS Bank-sponsored race fell flat, quite literally, at the bottom of Coronet Peak in a spectacular crash on Wednesday, but he fought back in outstanding fashion today to win an arduous stage from Invercargill to Bluff for the second year in a row.

Those who saw Piccoli crash might have been surprised he even made it to the start line, let alone win Bluff, arguably the most iconic stage in New Zealand’s most prestigious stage race.

“I was pretty sore. It definitely took me an extra couple of coffees to get going. This is my job and I’m used to crashing. I have a routine for looking after myself and tending to my wounds,” he said.

“(Wednesday) was a bit of a personal disappointment. The team rode for me all day and sacrificed themselves for me, it was just a technical mistake coming into the last corner with a little bit of gravel on the road.

“Today was a little bit of redemption for that and we went one-two with myself and Hamish (Bond) getting a little bit back on GC. We are still in the fight, we are still racing our bikes and we’ll see what happens in the next couple of days.”

It was fast and furious from the outset today, with a break soon developing that was made up of most of the various jersey contenders.

Through Woodlands, Edendale and Wyndham the race was buffeted by crosswinds, before making the daunting turn back towards Invercargill into a 40kmh westerly, with the shadow of Motupohue lurking in the distance.

It was Bond who struck out for a stage win first before Piccoli finished the job for Kia Motors-Ascot Park Hotel, although they were only able to nibble at tour leader Michael Vink’s lead.

“We started in atrocious rain and then crosswinds all day. Luckily we had three in the group and the numbers were a huge advantage heading into the climb and we finished it off,” Piccoli said.

“The race isn’t done, like we saw today, if you get caught on the wrong side of a break you can lose minutes. We still have a strong team and we will look to animate the race and we definitely aren’t going to give up.”
Vink who finished runner-up in both 2016 and 2017, leads Bond by 1min 32sec and Sam Gaze by 3min 17sec, with Piccoli just outside the top three ahead of a 151km stage from Invercargill to Gore which has produced fireworks in the past.

“We don’t need to gain any time, we just don’t want to lose any time,” Vink said.

“It’s a classic stage for an ambush and it’s where I lost the jersey two years ago so I’ll certainly be trying to avoid that. Because it’s late in the race, everyone has got tired legs. It looks relatively benign, but it’s a long stage and it can be wet and quite windy. There’s no defining factor, but there’s a lot of things that add up.”

Ethan Batt leads both the King of the Mountain and under 23 classifications, with Southland’s Matt Zenovich holding onto the Sprint Ace jersey and Paul Odlin winning back the silver jersey for over 35 riders.

Photo: Canadian James Piccoli winning for the second year in a row on Bluff hill during stage four of the 2018 SBS Bank Tour of Southland.. Credit: James Jubb/Studio Jubb